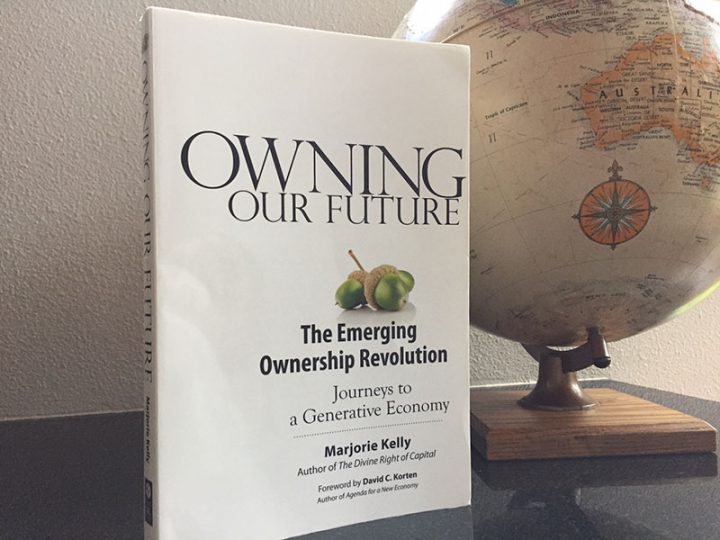 After finishing The Divine Right of Capital, I searched my house high and low for my copy of Owning our Future, Marjorie Kelly’s other book on Capitalism, which I remembered was good enough to merit ordering a second copy after the search came up empty.

Whereas The Divine Right of Capital is 95% problem, Owning our Future is a travelogue of solutions.  Kelly takes us with her traveling to The New York Stock Exchange on Wall Street, the Beverly Cooperative Bank in Boston, Novo Nordisk in Denmark, the John Lewis Partnership in London, and Organic Valley in Wisconsin, with a few stops along the way to visit other co-operative housing developments, community owned wind projects, and employee owned companies.

In short, we get a tour of alternatives ownership structures that create “generative” organizations (vs. “extractive”) which Kelly expects to be models for an inevitable collapse to the status quo capitalistic system.

Before the book heads down that path, it goes deep into the flaws of the current structure, tracing down the story of a single foreclosed house in Boston, the half dozen refinances that obscured the ownership so badly that it took years for anyone to be able to buy the house.  After tracing down that path, Kelly amazingly managed to track down the original owner and uncover the personal story of how those refinancing came to be, how the family was taken over by the great housing bubble of 2006-2007, and how the system failed that family.

All in all, I highly recommend this book to understand what’s wrong with the system and to gather some ideas on how it can be fixed.  It’s still short of the answer I’m looking for, as now I have a dozen different solutions to look at, and not enough details of any of them to know where to start.

Luckily, serendipity happened, as it does when you are not looking for it, and a chance meeting at the Seattle ferry led to an introduction to Fran Korten, long-time publisher of YES! Magazine, wife of David C. Korten, who wrote the forward to this book (amongst many of his own books), and Fran introduced me to the one and only Marjorie Kelly.