Venture capital should never have become the standard way for us to fund new businesses. As an asset class, it’s uniquely designed to fund disruptive innovations. It does this by funding ventures that are likely to fail, but — if successful — can result in outsized outcomes. In other words, it’s a ‘home run’ based model. For a venture capitalist, seeing 6 or 7 out of 10 portfolio companies fail is part of the playbook. In fact, if VC’s aren’t seeing enough failures in their portfolio, they take it as a sign that they may not be taking enough risk (as Babe Ruth once said: “every strike brings me closer to my next home run”). Good VC’s understand they aren’t looking for a ‘normal distribution’ of outcomes in their portfolio — they’re looking for the “fund maker”. Or in other words, the unicorn.

But does that kind of failure rate represent a good deal for (most) founders? How about for society as a whole?

By looking at the world through a venture capital lens, we do three things that are often bad for founders, workers, communities and the planet:

In fact, it’s debatable whether VC is a great model for investors themselves. In general, only the elite ‘top quartile’ venture funds have generated what is often referred to as “venture returns” for their investors (the LPs). Unicorn hunting is a tough business!

Read the rest of this essay by Aner Ben-Ami on Noteworthy, including an explanation of this great diagram: 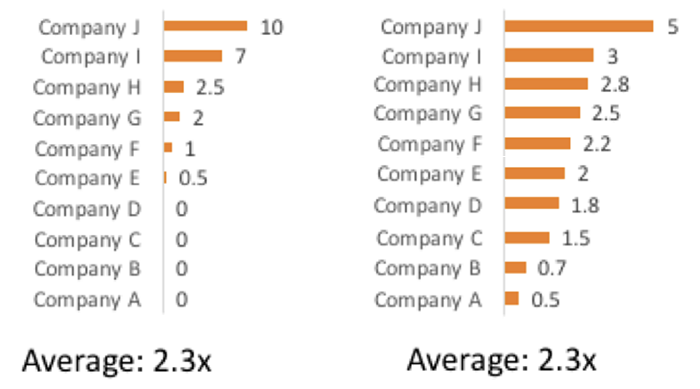 Compounded annual growth rate (CAGR) is a very common metric when looking at how fast a startup is growing. Unfortunately neither Excel nor Google has a formula named CAGR. Instead, you need to use the RRI function. When you do this, there is one pitfall to avoid. There are three parameters to RRI. The first is the number of values. The second is the starting value. The third is the ending value...