Ten years ago I published my first book, The Next Step. This was inspired by a few life changes, including being asked to teach entrepreneurship to MBA candidates at Bainbridge Graduate Institute, working as an Entrepreneur in Residence at the University of Washington, and the imminent launch of Fledge, which at the time was one small business accelerator.

This first book covered the process from having a business idea to launching that business.

Along the way, The Next Step turned into a series of books, as I dove deep into the topics startup marketing, startup sales, financial modeling, fundraising, pitching, storytelling, and dividing equity. Some of those topics received their own books, and some bundled together into yet-more books.

Ten years later, the series had eight books, the first six for entrepreneurs, one for investors, and one for others who teach entrepreneurs. Ten years is a long time, and it seemed time to review and revise all these words.

The result of that effort is The Next Step, the 10th Anniversary Edition, now a single hardcover (and e-book). One big step-by-step guidebook and reference for entrepreneurs anywhere in-between the stages of having an idea and having a profitable company. 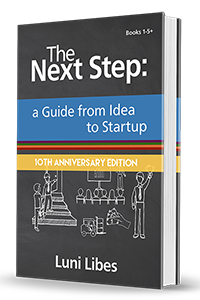