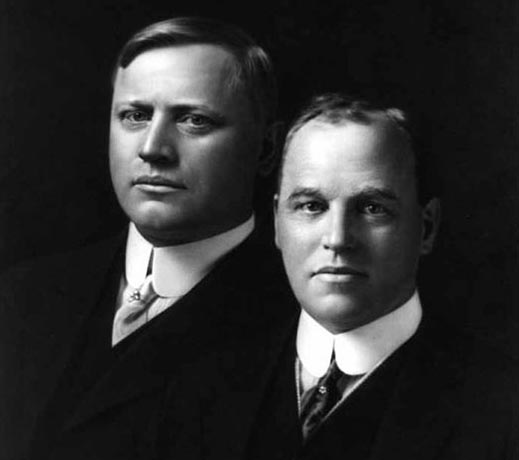 Income inequality has finally floated to the surface of the news.  It’s nice to see this issue being talked about, but much of what I’m seeing is focused on the symptoms, with solutions like “just pay the workers more”.  What I’d prefer are some opinions on the root causes, purposefully plural as this is not a simple issue.

I believe I have uncovered one such hidden cause.  It lies down in the deep underbelly of capitalism, and thus you may need to put aside some of your most beholden thoughts to consider it.  The cause hides within a simple question:

Why does equity last forever?

To answer this question, let me take you back to 1903.  In 1903, Henry Ford founded the Ford Motor Company.  This was not his first car company, but his third.  The first two failed.  With those failures, Henry’s new investors insisted that he outsource production to John and Horace Dodge, already famed manufacturers, and the brothers themselves invested $10,000 (1902 dollars) in Ford’s startup.

Back in the early 1900’s, unlike today’s high-growth companies, the norm was for companies to pay out at least 80% of their profits as dividends.  Henry didn’t much like investors, and preferred reinvesting profits for growth, paying out a “miserly” 46% of Ford’s profits (on average) between 1903 and 1915.

Despite being miserly, the total payouts in those 13 years was $55 million.  For John and Horace Dodge, with their combined 10% ownership, they received a total of $5.5 million (1915 dollars).

Before you go compare this to the Apple, Google, and Facebook IPOs, do note that upon receiving their $1.6 million dividend check in 1915, the Dodge brothers still owned 10% of Ford’s company.  The story gets more interesting in 1916 with $60 million in profits, which could have meant another 600x return in that year alone, but that is a story for another post.

With this “real life” case study in mind, back to income inequality, and the question at hand.  Why is equity eternal?  What justifies annual dividends after the initial investment capital has been repaid multiple times?

The common answer is that equity is risky, and thus requires a high reward.  I’ll accept that, but what risk is worth a 550x reward?  Or a 100x reward?  Certainly, if there is only a 1 in 100 chance of even a 1x return, then the reward should be more than 100x.  With those odds, given 100 investments and all outcomes being 0x or 550x, the average return should be 5.5x.  Clearly, given most investments have lower returns, the risk must be lower than 1 in 100.  What are the odds for early-stage investments?

In the seminal study of returns to Angel investors, Wiltbank and Boeker show that across the 500+ investors and 17 years in their data set, the average return was 2.6x in 3.5 years, for an IRR of 27%.  They further show that the successful investors included at least one investment with a 10x or higher return, which occurred in only 7% of the investments in the data set.

Which means that for an individual investment, given a sufficient set of deals to pick from and sufficient due diligence, the odds of picking a big winner is about 7 in 100.  Risky, but only when you consider that single investment. When you instead look at portfolios of early-stage investment, Kevin Dick, analyzing the same Wiltbank/Boeker data set shows that with a portfolio of 100 Angel-sized, the odds of seeing a positive return are nearly 100%.  And with 200 investments, the odds are you will double your money.  (Past performance and incomplete data is not necessarily indicative of future results).

Let’s go back to 1903.  What if John and Horace had lent $10,000 to Ford?  Ford could have easily repaid the loan in a year or two or three, paying a 27% interest rate, equal to the Wiltbank/Boeker IRR.  With its success, Ford could have easily paid 30% or even 100% in interest.  After a few years at any of those rates, the debt would be repaid, and the debt retired.  Retired, as a key difference between debt and equity is that debt is not forever.

Quickly, let’s talk about debt.  The justification for debt is that the borrower is “renting” capital, and that the timeframe, risk, and market set a price for that rent, which takes the form of an interest rate.  As both the capital and rent are denominated in dollars, this price of capital is not always obvious.  Charge rent in a different currency and it becomes obvious.  For example, I lend you $120, you each month you pay me $10 (repaying the principal) and give me a chocolate bar (the rent).  After a year the $120 has been paid back ($10 x 12 months) and in exchange for the use of my $120, you’ve paid me 12 chocolate bars.  Or in other words, the cost of my $120 in capital was 12 chocolate bars.

Within this in mind, the original question can be reframed as, what is the cost of capital in an equity investment?

In those terms, the cost is infinite.  Not only did Ford continue to pay dividends in 1916 and beyond, the shares Henry sold his investors back in 1903 are still outstanding, available for your purchase on the NYSE.  If you go buy a share right now, next quarter you will receive a $0.50 dividend, and you can continue to do that for as long as you’d like, as long as the company doesn’t go bankrupt, or stops paying a dividend.  At the current price and dividend it will take 30 quarters (6 years) to be paid the $15 price for your share, but like Horace and John, that share will still be yours after that.

This is true for any of the 500+ publicly traded companies that pay a dividend.   Most of these companies are profitable, hence the dividends.

My claim is that this eternal equity, infinite cost of capital is a key cause of income inequality.  I claim that this is the root cause that makes capitalism look greedy.  I claim this is a flaw in the system that unduly rewards the people who have capital, overpaying them for the use of that capital, at the expense of those that are creating the value.

To my capitalistic ears, that last sentence sounds far more like Karl Marx than Adam Smith, but none the less, after thinking this through, it seems to me to be correct.  From this claim, unlike Mark, my logical conclusion is not to throw out ownership, nor even throw out equity, but to modify the traditional equity investment structure to set a risk-adjusted cost to that capital.

We live in an age of big data.  We can analyze the history of investing and determine actual risks.  From that, we can negotiate a reasonable “rent” for the use of capital.  And with it, we can end the era where the capitalists earn unlimited capital from the use of their capital, giving a chance for the 99% to catch up.