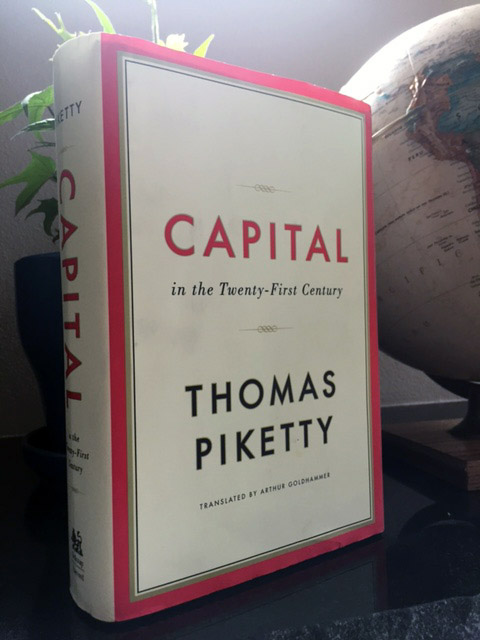 Income inequality is in the news, along with the populist Brexit, Trump, and La Pen movements that have sprung from the consequences of that issue.  Before those votes, I wondered if there were any real-world consequences from income inequality, or whether it just made good sky-is-falling news stories.

One book that greatly helped me understand what is truly going on is Thomas Piketty’s Capital int the Twenty-First Century, a masterpiece of 570 pages of statistics and analysis that unfortunately ends with 7 pages of useless conclusion and unworkable solution.

While overly repetitive, the opening is none the less well worth the read, with two hundred years of data from the UK, France, and U.S., plus smatterings of data from elsewhere in Europe and Asia, presented in graphs that easily show the key issues, e.g.: 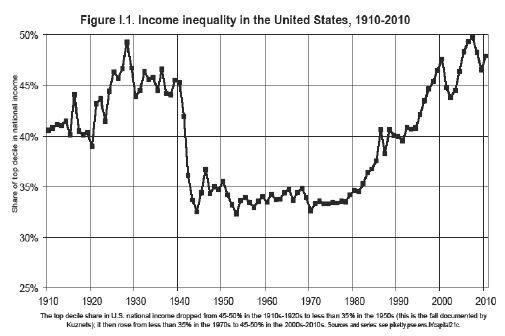 Piketty reiterates the dichotomy spelled out by Adam Smith in The Wealth of Nations and Karl Marx in Das Kapital (the previous Capital this book pays homage to), that all income comes from either capital or labor, and ultimately all the income from capital itself derives from someone’s labor.  Piketty further states (with little evidence, despite 570 pages of statistics) that r > g, that in the long term, the return on capital is always larger than the growth rate of the economy, and thus inequality inevitably rises as capitalists earn more than those without capital.

Whether that is inevitable or not, it’s happening.  The above chart shows the income of the top 10% of Americans, from 1910 through 2010.  More than 40% of all income flows to 1/10th of Americans, and the same is true in the UK, France, and even in the Scandinavian countries, where are stereotypically far more socialist than the U.S.

More importantly, Piketty does a wonderful job of splitting apart income inequality from wealth/asset inequality.  While the above chart looks bad, the story is far worse for assets, where the top 10% own more than 60% of everything that can be owned, and where half of that 60% is in reality owned by the top 1%.  The chart below shows this for the U.S. and Europe, from 1810 through 2010. 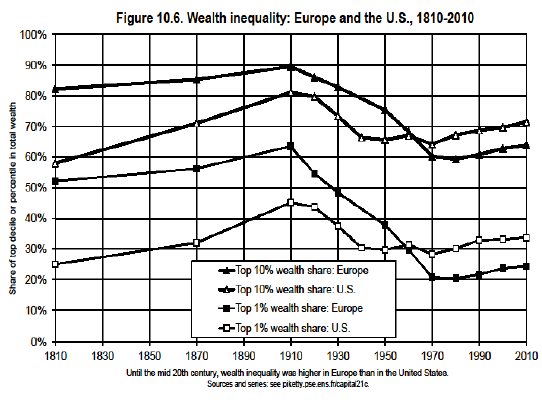 The rich really have gotten richer, with the only respite to that being the Great Depression and the two World Wars, with only a modicum of help by the income and estate taxes, which came along at the start of the 20th Century.

The scary part of Piketty’s Capital is that the only times in history when inequality has gone down have been in depressions, wars, and revolutions.  Piketty’s proposed solution is to create a global tax on assets, to move some of these assets from the rich to the poor before the next depression, war, or revolution comes along.  Given most assets these days are not land, there is no way to realistically implement a Piketty tax and no way the top 10% (who donate the vast majority of the capital needed to run political campaigns) would let any meaningful tax get deployed.

Thus Piketty’s contribution is a wealth of knowledge of the details of the problem, but no matching wealth of ideas on how to fix it.  My conclusion is that its time to go back to Smith, Marx, and others to look for ideas that have yet to be tried, which the capitalists will want to implement.