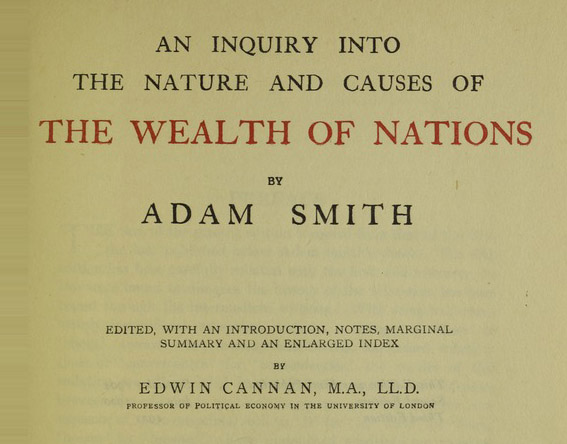 This is one of those books you hear about so often you think already know, but which you really only know of until you crack it open and dig into the details.  And wow, are there ever details.  Depending on the size of the reprint, it’s between 750 and 1200 pages in total.  Originally published as five separate books, so even if you think you’ve read the book, you may have never made it past Book II.

The rest of the details are Smith’s recipe for maximizing production.  Given this is the first formal book on Economics, it takes Smith hundreds of pages to describe that recipe.  The inner workings of capital, labor, trade, tariffs, taxes, colonies, corporations, and government are spelled out in minutia upon minutia, down to the pound, shilling, and pence.

The level of detail is astounding, with examples not only from Scotland and England and France, but also the British Colonies, Indostan (India), China, Persia, and even at times back into the Roman Empire.  There was no bibliography in my version of the text, no footnotes in the text, and no amount of googling explained how Smith gathered all that data.  Between the length of the text and the level of detail it is quite understandable how these books took nine years to write.

Yes, there is an invisible hand mentioned, but all of three times.  Yes, there is an argument for low tariffs and reasonably low taxes.  The libertarian, Laissez-faire beliefs underlie the arguments, but Smith spends far more pages talking about how many shillings and pence are in the tariffs for wheat, the percentage rate of tax on land and homes and people, the amount of debt year by year in the Bank of England, the cost of each English war, and so on at a mind numbing level of detail.

In that way, Capital in the 21st Century is an homage to The Wealth of Nations.  If only Smith had a spreadsheet, his book too would be full of tables and graphs, rather than dozens of pages of prose drawing those graphs in the minds of readers.

In terms of answering my questions on income inequality, Smith was not of much help.  Smith lays down the groundwork dividing capital and labor which Marx picks up 72 years later in his books.  Smith briefly (40 or 50 pages) describes corporations, but they were too new and too few in the 1770’s to be important to his ideas.

In short, I’m very glad to have read the book, but it leaves me with more questions than answers.  If the father of Capitalism doesn’t have those answers, perhaps its biggest enemy will.  Next up, the Manifesto of the Communist Party.