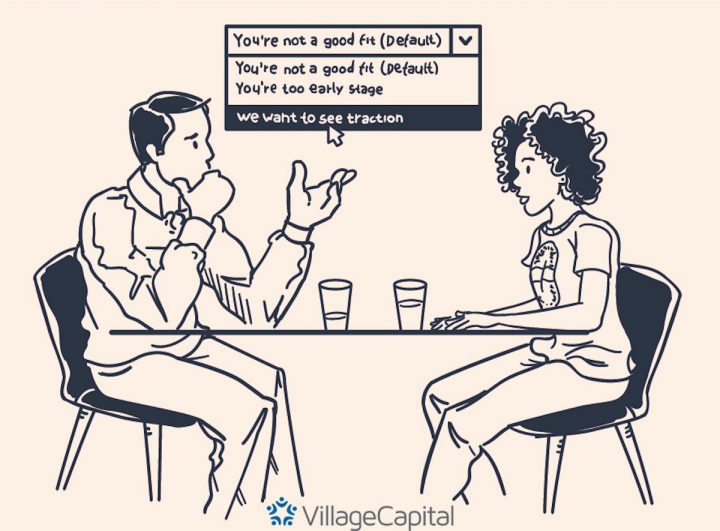 Put yourself in the shoes of a startup investor.

Every day you review entrepreneurs, through a sort of funnel: very wide at the top and narrow down below, with only a few investments coming out the bottom each year.

The average venture capital firm reviews approximately 1,200 companies in order to make 10 investments. At Village Capital, we make contact with nearly 10,000 entrepreneurs a year, get to know about 150 of them through our programs, and eventually invest in 15 to 20.

Managing the “top of the funnel” is exhausting, and it can quickly lead to cognitive overload. You see thousands of great ideas, but you can’t help everyone. So you start to rely on shortcuts. You seek out patterns to separate signal from noise. And you run out of creative ways to say No, so you end up falling back on uncreative ways: “Love what you’re doing, but you’re too early stage”. “Come back when you’ve achieved product-market fit.” “I’d just really love to see X function in your team built out a bit more.”

The problem: this shorthand language is the VC equivalent of those pre-written text messages on your phone — ultimately, it’s no replacement for real communication, and something gets lost in translation every time.

Now put yourself in the shoes of an entrepreneur.

You build an MVP and set up meetings with investors. You take dozens of meetings at coffee shops, bars and well-lit offices, but keep hearing No. Not only that, you often leave with little in the way of constructive feedback. You want to be able to share news with the investors you met about your progress, and maybe you do, but you don’t know exactly what it would take for an investor to get to Yes.

This is all too common: entrepreneurs and investors lack a common language to communicate what they are looking for. As a result, investors rely on shorthand language, which makes the funding process really tough for both sides of the table.

Laszlo Bock, former head of People Operations at Google, describes this type of predicament as the “Color Blue” problem. As he describes it, colors are subjective: “How do I know that when I see the color blue, it’s the same as when you see it? Are you thinking of navy, royal, or baby blue?” In the same way, “early-stage” can mean two different things to two an entrepreneur and an investor, or two different investors. So can “product-market fit”. For that matter, so can “scale”.

Over the past several years, our team at Village Capital has worked with hundreds of entrepreneurs and investors to solve the “Color Blue” problem. What does an investor mean when they say “product-market fit,” “value proposition,” or “scale?” And how can we use these definitions to best match entrepreneurs to investors at the proper stage?

The framework, which we call the VIRAL (Venture Investment-Readiness and Awareness Levels) Pathway, helps entrepreneurs and investors use the same language at the top of the funnel. VIRAL helps entrepreneurs become self aware and articulate just how ready they are for investment. It allows investors to communicate the point at which they want to invest. We’ve found it a helpful lingua franca to kick off — and sustain — entrepreneur-investor conversations.

When the top of the funnel is clear and transparent, all entrepreneurs can get a fair shot, and investors are better able to find the best ideas.

In developing this framework, we took pointers from NASA, which experienced a similar problem in evaluating the level of maturity of technologies. (Steve Blank also developed a startup framework based on NASA’s model) The secret sauce is precision. NASA ranks the level of maturity of a technology from 1 to 9 to avoid confusion about the stage of the technology’s development: instead of saying “early-stage technology” or “late-stage” technology, they say “Level 3” or “Level 9”.

The VIRAL framework outlines nine levels that companies go through over the lifetime of the firm (what investor Tom Bird, a partner of ours, calls “laps in a relay race”.) It also identifies milestones across a range of categories: team, product, and business model, and others. Here’s what it looks like:

How it works: Defining product-market fit

As an example of how VIRAL is used in practice, let’s take one phrase we often hear investors use: “We invest when a company has reached product-market fit.”

To many investors, product-market fit is a very advanced stage. It means that a company’s inbound requests have exceeded outbound sales. It means a company is so good that it’s growing without having to try very hard.

An entrepreneur might understand the term differently. Let’s take an entrepreneur, Sally, who is selling the same product to multiple customers and getting great feedback. Sally might look at her progress and tell herself, “We’ve reached product-market fit — now it’s time to talk to venture capitalists.” When Sally meets the investor, she’ll receive a hard No, rather than having a productive conversation about what product-market fit looks like.

Sally is at VIRAL Level 3, while an entrepreneur that has achieved true product-market fit would be at VIRAL level 7. It’s important to note that a Level 3 company is not worse than a Level 7 company. The company is just at a different level of investment-readiness. Many types of investors (such as angel investors) prefer Level 3 companies because they require smaller capital amounts and provide greater potential upside at lower valuations. But venture capital firms rarely invest before Level 7.

Now imagine that Sally already knows that she is at a Level 3 and that our hypothetical investor is at a Level 7. She e-mails the investor. Instead of saying, “You’re too early-stage,” the investor could say “Come back when you have validated unit economics, and your inbound requests exceed your outbound sales efforts — we may be more ready to invest then.”

Armed with this information, Sally can have a more useful conversation with the investor: “Here are the things that I plan to do in the next eighteen months: bring on a CTO and bring on two more large enterprise customers (we’re already in talks with ten in our pipeline). What else would you need to see from me a year from now to warrant another conversation?”

How you can use VIRAL, whether you’re an entrepreneur or an investor

We originally developed VIRAL for our own internal use, and have been using it during our investment-readiness programs at Village Capital for the past several years. We first developed it as a framework to help us internally, but companies started using it as a tool.

We’ve also been working with investors to use VIRAL to manage the top of their funnel. NRV, a fantastic regional venture fund in Richmond, Virginia, has started to do an initial VIRAL diagnosis of companies that initially contact them for investment. Instead of “We love you, but you’re too early stage,” they can provide feedback in the context of the VIRAL framework, highlighting where the company is, and where NRV invests. When these entrepreneurs do become investment ready, you can bet NRV will be their first call.

We’ve also been using VIRAL to help organize ecosystems. We recently worked with US Senator Mark Warner and Virginia Secretary of Technology Karen Jackson to help map the entire investor community in Virginia, based on what VIRAL level (or levels) each investor focuses on. Once the project is finalized, entrepreneurs will be able to see how the entire ecosystem is organized and who they should be speaking with, whether they are a Level 3 or a Level 7.

We’re excited to work with partners worldwide to make entrepreneurship more inclusive. The VIRAL framework is not going to solve all communications problems between entrepreneurs and investors, but it can help. We’re currently working with partners in three ways:

As always, let us know if you have any questions at ross@vilcap.com or bidisha@vilcap.com. Thank you!

Originally posted at on Medium.  Ross Baird is President of Village Capital. Bidisha Bhattacharyya is Vice President of Product and Emerging Markets. Cartoon credit: Awais, whose work can be found here.

Luni’s NOTE: VilCap’s VIRAL is a great tool for venture-scale companies.  For Zebras and SMEs, the team at VilCap and I have been working on variations of that tool.