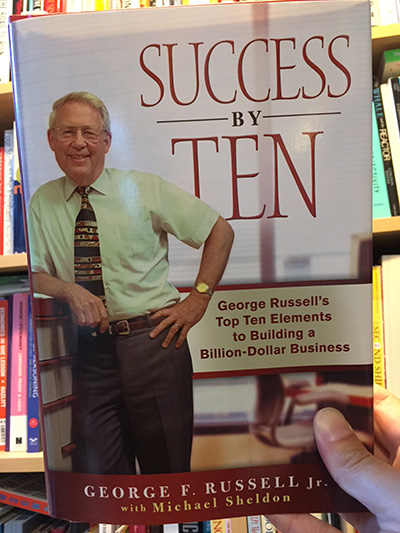 I love to uncover hidden assumptions and thus enjoy stories of the early days of some industry,  where all of what we take for granted today didn’t exist.  Modern portfolio theory, mutual funds, and retirement accounts are commonplace today, but were all invented and become popular between the 1960’s and 1990’s.

Success by Ten is supposed to be advice for creating a $1 billion company, but really it’s a biopic of George Russell, who grew the financial management company his grandfather founded from tiny $150,000 consulting company to a $1 billion acquisition by Northern Trust.

If you like the history of finance, then it’s an interesting read.  As for its advice to entrepreneurs, it suffers from a common ailment, it is advice from an entrepreneur who only ever built one company, with that one company never having any life-threatening issues.  For example, and only summarizing this slightly… if an acquirer offers you $1 billion in cash for your company, take it.

Bob’s Red Mill burned down, and Bob hit quite a few hurdles in his rise to success, so his personal and corporate biography was a bit more interesting, but for some reason I love the histories of financial instruments and financial structures, so if I only could read one of People Before Profit or Success by Ten, I’d probably read the latter.

The Long Twentieth Century is more than its name describes, a very long and detailed economic history of not just the 20th Century but global Western capital of four eras: Venice/Genoa, Dutch Empire, British Empire, United States. TL;DR, with an emphasis on the don’t read… the interesting part of this book isn’t the 20th Century nor the Long 18th Century either, as both of those...