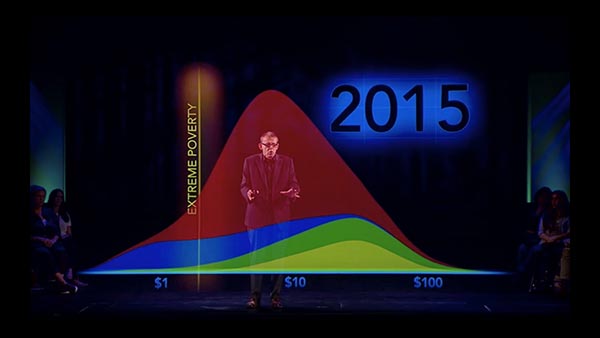 Hans Rosling has a great new talk on global poverty (with even better graphics than his first TED talks).  As always, he tells a great story.  However, in his five minutes he explains what happened over 215 years, but doesn’t provide any analysis.  Most importantly, he doesn’t point out that we are not only winning this war on global poverty, but at the same time losing.

The story starts in 1800, when just about everyone in North America (yellow), Europe (green), Africa (blue), and Asia (red) were equally impoverished.  The story ends in 2015 with most of the world living out of poverty. 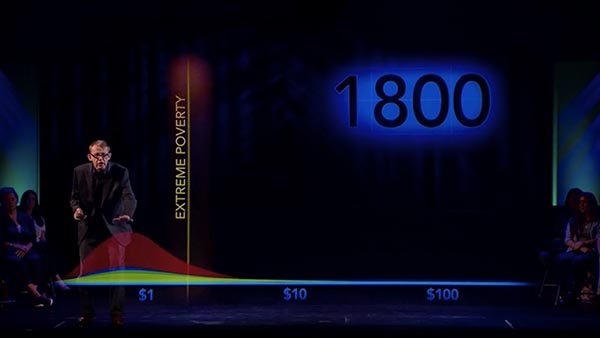 The economics of farming are horrible when everyone is a farmer.  When a farmer grows food that is eaten by his (and her) family, no money changes hands.  Thus no income is generated.  Poor people by definition have little to no income.  To make money as a farmer, you need a lot of people who are not farmers.  People who have to buy the food they eat.  Today, 99% of Americans and Europeans are not farmers.

The question then is how did we get from a world of 95% farmers to 1% farmers?  Simple answer, the Industrial Revolution.  Not a revolution of guns, but a revolution of a key idea: moving beyond human and horse power, to harnessing the power of machines.

For example, in 1800 a plow would have been pulled by one horse (or an ox), i.e. a “one horse-powered plow”.  That was replaced by a 100 horsepower tractor, pulling multiple plows, burning oil for power.

In 1800, it would have been common to see two horses pulling a cart.  By 1850 it was not uncommon to see a 20,000 horsepower steam locomotive, pulling a whole train of cars, burning coal for power.

There were some machines in 1800.  Flour wasn’t made by hand, it was ground at the mill.  That would be a water wheel powered mill if there was a stream or river nearby, with that water wheel generating a 1 kilowatt of power.  Today you can have a kilowatt of power from one electrical outlet, which gets its power from one of thousands of electric generation stations, each of which generates a gigawatt (a billion watts) of electricity, burning coal or natural gas.

The key formula for the Industrial Revolution is to (a) turn energy into industry, which (b) creates jobs, and (c) jobs create wealth.  For 200 years that energy has primarily been fossil fuels, dug or pumped from the ground.

Here’s where I wish Hans has stopped and pointed out the first of three flaws in the story, as it’s this breakdown of top/middle/bottom where the UN has been touting success in the war on poverty.  Yes, a far greater percentage of the population is living out of poverty now than in 1800.  But at the same time, there were only 1 billion people total in 1800, and today twice as many people are poor.

We’re thus winning and losing, both at the same time! 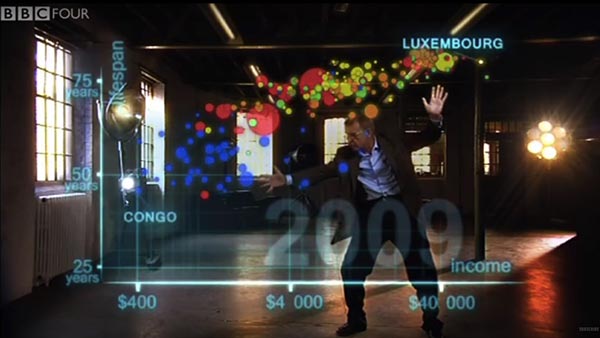 To understand why, we need to look at the data by country.  For that, we can look at the UN’s statistics for its 194 member countries, by per-capita GDP.  The image along the right side is from Wikipedia (June 2016).

The good news in this story is that billions of people are no longer poor.  The bad news is that we’ve left billions behind.

That said, we do know why they’ve been left behind.  Look at the bottom third of countries on the list, and you’ll see a list of countries where 85% or more of the population are farmers.  Sound familiar?  It sounds crazy, but the underlying truth hiding in this data is that the Industrial Revolution has yet to reach a third of the people on the planet.  Bring those farmers machine power, and their children and grandchildren will no longer be poor.  This worked for America and Europe and Japan.  It worked again for China and India.  And it will work for Africa, Southeast Asia, Central America, and everywhere else that has so far been left out of the revolution.

Two interesting infographics from The Visual Capitalist. The first showing the distribution of GDP around the world and the second, the size of the global middle class both now and where it’s headed by 2030. Do remember that GDP is a flawed index, but ignoring that, what pops out to me on this graphic is just how insignificant the oil wealth of the Middle East is in comparison to North...